HEAR, HEAR FOR A TRIO OF OPTIMISTES 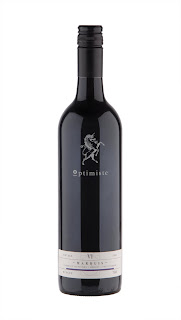 AFTER growing some of the best fruit in NSW's Mudgee district and seeing local winemakers scooping up the medals with the wines that came from it, Steven and Sharlene Dadd took the plunge several years ago and decided to go into the winemaking business themselves.

They got great support for the venture they dubbed Optimiste Wines from Arrowfield's acclaimed winemaker Barry Kooij, and have now been joined by exciting young maker, Michael Slater.

The Dadd's have just released their first wines, a 2005 Optimiste Cabernet Sauvignon, and an Optimiste Petit Verdot and a Marquis from the excellent 2006 vintage – the Marquis a beautifully smooth, flavoursome blend with signature blackberry flavours from the 50% Cabernet, nice ripe plum fruit from the 30% Merlot component and lifted aromas from the balance of Petit Verdot.

The Dadd's dedicated their Marquis to young son, Marcus whose inspiring struggle with deafness, they say, captures the spirit of hope and passion of the Optimiste label.

Pay $24, and enjoy this one with lamb cutlets and a lentil salad.

ONE FOR LUNCH: EVANS & TATE drew fruit from across the whole of the Margaret River region for their 2007 Margaret River Classic White, a wine that year after year showcases the crisp zestiness of the Region's Semillon and Sauvignon Blanc.

Tropical fruit notes from the Sauvignon Blanc component and herbal gooseberry and nectarine from the Semillon make this an ideal wine for al fresco dining, one that's got "chuck another shrimp on the barbie" written all over it… so pay $18.99, gather some mates and do just that.

. NEW Mudgee label inspired by a spirit of hope and passion

. CHUCK another shrimp on the barbie with this Classic White

HISTORY’S IN THE BOTTLE

TRIVIA buffs may find there's a buck to be made in the history of McWilliam's iconic Mount Pleasant Elizabeth Semillon, the 2003 of which is now released.

Firstly Mount Pleasant has – probably uniquely in the world – had only three Chief Winemakers since being established by the legendary Maurice O'Shea 87-years ago in 1921, and secondly it's Elizabeth Semillon that debuted in 1967 was so-named by the McWilliam family after Queen Elizabeth II who was enjoying great popularity in Australia at the time.

Thirdly the wine for nearly fifteen years was incorrectly labelled "Hunter Riesling" until this was corrected by current Chief Winemaker, Phil Ryan in 1982…and finally its sister wine, Mount Pleasant Philip Shiraz that is also still one of the company's icons today, was named after Elizabeth's husband, Prince Philip.

Ryan, who has been at the helm since 1978, took over from Brian Walsh who had been given the baton by Maurice O'Shea in 1956, which helps explain the consistency of style of this exceptional Hunter Valley wine.

Phil Ryan crafted the 2003 from fruit handpicked for its primary lemon and citrus fruit characters that come through generously on the palate, and there are also hints of typically aged-Hunter Semillon toast and lanolin characters.

This is a serious wine for those who are equally serious about matching good Semillon with good seafood, yet remarkably its just $17.99 a bottle. Team it up with Terikyaki infused scallops on limed Vermicelli noodles.

ONE FOR LUNCH: KATNOOK Estate Cabernet Sauvignon is another classic that's been around a long time (since 1980,) and the 2005 reflects everything that's great about Coonawarra; several vineyards contributed to this wine that has beautifully concentrated fruit flavours and fine tannins. Pay $40 and share it with friends over a slab of high-cocoa, bitter-sweet dark chocolate.

A WINE of longevity: Mount Pleasant has had just three Chief Winemakers in its 87-year history.

BITTER-sweet: this wine is one for the choco-holics.