BOTTLING OUR BEST WITH SCREWCAPS 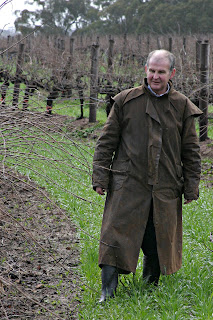 IT doesn't seem that long ago that Australian winemakers started putting the majority of their wines under screwcaps in place of cork, as they sought to eradicate cork taint and preserve wine freshness in the bottle.

But while the year 2000 is generally considered the "beginning" of the trend,  experiments in fact began as far back as forty years ago. And the first really concerted efforts to sell the idea of screwcaps to consumers in the 1980s and 1990s met with quite strong opposition: buyers looked on wines under the new closures as inferior products, and most makers went back to cork.

But in South Australia's Clare Valley when several makers banded together to import half a million screwcaps and bottles from France to bottle their premium 2000 Rieslings, consumers suddenly appreciated the reason for screwcaps: they were in fact an assurance of longevity and bottle freshness.

One of those Clare Valley makers, Peter Barry of Jim Barry wines remembers it well. "We were fed up producing some of the world's finest, most delicately and freshly flavoured Riesling, only to open bottles that had been cork-sealed and find our great wines corked, oxidised or just obviously dull," he says.

"The Australian Wine Research Institute, however, found that wines under screwcaps showed the highest level of overall fruit character retention, the least development of oxidised characters, and effectively zero cork-taint. It was exactly what we were seeking; armed with this knowledge and our own research, we knew the screwcap was here to stay."

At just $14.95 it is ideal now with lighter-style seafoods, chicken dishes and salads – or rest assured that under its screwcap, it will cellar well into the next decade, further developing its already apparent layers of flavours.

[] PROVING the value of the screwcap: an almost "flamboyant" Jim Barry Riesling from the Clare Valley

[] ONE of screwcap's pioneers in Australia, Peter Barry of Jim Barry Wines
Posted by rodeime