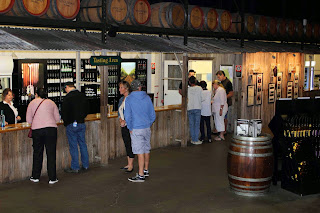 IN his continuing search for the more weird, wacky and wondrous in the world of travel, David Ellis says Hunter Valley winemaker Neil McGuigan has long extolled the value of having a winery cellar door – and while his gets 120,000 visitors a year, he says he was gobsmacked on a recent overseas trip to find out just how valuable.

"I was in Bangkok, and after a winemakers dinner two Scottish people came up to me after they saw our McGuigan banner and said they'd just visited Australia, been in the Hunter, visited our winery and, yes, bought some of our wine.

"Then a couple of days later in a taxi in the UK the driver saw my McGuigan shirt motif, said he'd been in the Hunter nine years before – and that he'd bought two cases of my wine.

"Blow me, a couple of days after that in Belfast I'd been launching our Black Label Reserve wines to the media there, mentioned the value of a cellar door, and after a story appeared in a local paper about it, a blogger put up that he'd been to our cellar door just a month earlier."

Finally on his return to Australia, Neil was promoting his wines in Melbourne to managers of a supermarket chain, when one told him he'd just come back from the Hunter – and yes, visited McGuigan's Cellar Door and done a nice little bit of personal buying.

Little wonder Neil extolls the value of his Cellar Door. (McGuigan's is at 477 McDonald's Road, Pokolbin and is open daily for free tastings from a couple of dozen wines on offer. Details www.mcguiganwines.com.au)