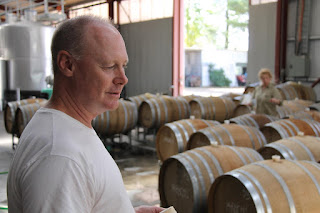 I wrote a few weeks ago about Orange's Brangayne having two vineyards — one decidedly higher and cooler than the other.

They're certainly not the only ones in the district adopting this approach. Ross Hill also has two vineyards — their 'home' vineyard at Wallace Lane, high on the slopes of Mt Canobolas, and the Griffin Road Vineyard, on the milder north-western edge of Orange as you head along the Mitchell Highway towards Molong and Dubbo.

If winemaker Phil Kerney didn't have the Griffin Road Vineyard at his disposal, the only red in Ross Hill's premium Pinnacle Series would be a pinot noir.

But the Pinnacle Series label carries four reds, of which the 2015 vintages have just been released — the two I've reviewed here plus a 2015 Shiraz and a 2015 Cabernet Sauvignon, the latter already having sold out.

They formed a very solid quartet, which will expand to a quintet if Phil Kerney gets his way, by the addition of a pinot noir made 100 per cent from the Griffin Road Vineyard.

That should make for a highly interesting comparative tasting — two pinots made by the same hands from vineyards separated by a couple of hundred feet in altitude.