DROLL THOUGHTS ON A ‘FEROCIOUS’ PROBLEM 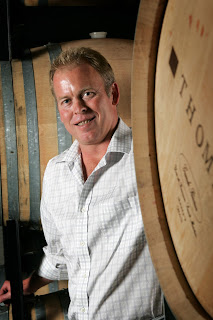 WINEMAKERS can be a droll lot, and Chateau Tanunda's Tim Smith certainly typifies this with his description of a 2009 vintage in the Barossa Valley that began perfectly, then descended rapidly into hellishly heatwave conditions that Adelaide newspapers described as "ferocious."

On top of that, for some reason when fruit had to be assessed for picking in February, Tim found some vines suffered severe heat stress, while others  were almost unaffected and showed extremely good natural acid levels.

And so how did he sum up such a cantankerous vintage? "It was certainly interesting," he said. Now that's droll, and Tim chose his fruit for one particular wine, a 2009 Moscato under the Barossa Tower label that's particularly close to his heart, by combing through his vineyards virtually bunch by bunch.

"We first made Moscato in 2005 when an Australian style of this wine was relatively unknown," Tim says. "But we've enjoyed continuing success with it, and actually have had to increase production year after year. In fact our 2008 has won two Gold Medals, as well as being named by the Adelaide Advertiser newspaper as one of the "Best Buys of 2008 at $15 and Under."

The just-released 2009 Barossa Tower Moscato from that "interesting" vintage, is a naturally sweet wine with refreshing acidity, and is full of fresh lime, watermelon and guava fruit flavours, with a soft gentle spritz. Pay $15 and enjoy with spicy Thai dishes – or apple pie and ice-cream.

ONE FOR LUNCH – in the Hunter Valley, Friday April 17 to Sunday 19 when 150-plus Hunter Semillons will be showcased as part of the 8th Semillon and Seafood Festival. There'll be matching food and Semillon tastings, cooking demonstrations, and the chance to meet with such legendary winemakers as Bruce Tyrrell, Mike Deluliis, Keith Tulloch, Phil Ryan, 2008 Winemaker of the Year, Andrew Thomas and others. Program details, ticket prices and to book into demos: (02) 4991 4533 or www.huntersemillonandseafood.com.au

[] MATCH for spicy Thai main courses, or with apple pie and ice-cream.