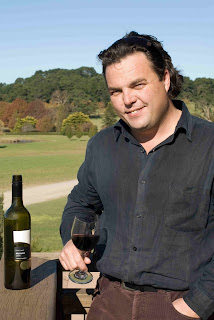 EARLY settlers looking beyond the confines of the Sydney basin and who ventured south to the high country of the-now NSW Southern Highlands, included grape growing amongst crops there as far back as the 1870s.

They didn't get far, particularly with the cold winters, but a century of so later and armed with more knowledge, skills and facilities than those early settlers, landowners once more turned their attention to grape growing – and this time with considerable success for themselves, and great rewards for wine buffs.

There are now over a dozen wineries in the Southern Highlands turning out highly commendable cool-climate wines that are fitting accompaniments to the products of the kitchens of the region's stand-out restaurants, alfresco coffee shops, country pubs and bistros that attract Sunday drivers and those looking for a long-weekend to this picturesque "little bit of England" so close to Sydney (its about 1.5hrs drive down the M5 expressway.)

One of the larger wineries is Southern Highland Wines who've a modern Cellar Door at Sutton Forest. Ask there, or local Highlands eateries and liquor outlets, for  their 2008 Pinot Noir that's a nice example of this often difficult-to-handle variety, with this one having nice blackberry, plum and wood-like flavours, and even suggestions of ripe tomatoes.  At $24 team it with a good roast dinner – turkey, pork or duck are ideal match-makers.

ONE FOR LUNCH: ANOTHER maker whose history goes back to the later part of the 19th century is Leasingham, founded in the 1890s by four business partners who converted a one-time jam factory into a winery to handle fruit from Clare Valley orchardists turning to grape-growing. Now, 120 years later, Leasingham have released a Jam Shed label honouring the venture – their 2009 Jam Shed Riesling being a great buy at $19.99, and its juicy lemon and lime flavours a perfect partner with pan-fried whiting fillets, a light salad and crunchy warm sour dough.

[] GETTING out of a jam: label honours Clare Valley pioneers who went from jam to winemaking.