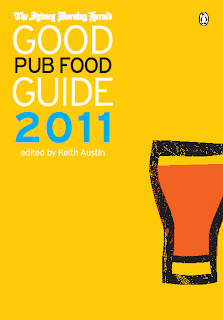 There's great news today for anyone in Sydney or NSW who loves nothing more than heading to the pub for a glass or two of something cold and a delicious, well-priced meal.

The inaugural Sydney Morning Herald Good Pub Food Guide 2011 is published today, and is set to establish itself as the definitive and indispensible guide to the best pub food throughout the Sydney area and regional NSW.

The book's publication will be complemented by the launch of the Good Pub Food Guide 2011 iPhone app later this month.

To celebrate the publication of the new Guide, the first ever Sydney Morning Herald Good Pub Food Guide Awards were held last night in Sydney, recognising the most outstanding pub food offerings in a range of categories.

Winner of the Best Overall Award was the Four in Hand in Paddington, a pub that also carried off the Best Pub by Region (City & Suburbs) Award.

(For a full list of categories and Award winners, please see below).

The Sydney Morning Herald Good Pub Food Guide 2011 is edited by renowned pub aficionado Keith Austin, who, along with a team of dedicated reviewers, spent several months putting together the material to make this Guide a pub-lover's delight.

Commenting on the Guide, Keith said that that the humble hotel is undergoing something of a renaissance, possibly fuelled by the inexorable rise of the so-called gastropub in the UK but also, he believes, by the realization that top-end dining has become prohibitively expensive in recent years.

"Pubs can – and do – serve some great food, and it's about time people realised that," Keith said. "There is a misconception that pubs are all about pie-warmer pies and dodgy sausage rolls but that's no longer the case."

"Our team of 70 reviewers visited more than 550 pubs across NSW – everywhere from Bryon to Dubbo, Wentworth, Eden and beyond – and we encountered everything from wagyu beef to fish so fresh it winked at you from the plate."

Keith said that his review team had to choose from more than 1,600 pubs and hotels across Sydney and NSW.

All the pubs reviewed in The Sydney Morning Herald Good Pub Food Guide 2011 are scored out of 20, with the lowest score of 12 signifying "not bad" and a score of more than 18 receiving the ultimate "gastro-tastic" accolade.

The Guide also uses a "schooner" ranking – just like the chef's hat and wine glass rankings in the recently-published Good Food Guide 2011 and Good Wine Guide 2011 books and apps.

Eight pubs around Sydney, Newcastle and regional NSW scored the top possible ranking of three schooners, while nine pubs scored two schooners and an impressive 30 pubs received a one "raise a glass of the good stuff" schooner rank.

As well as the reviews, The Sydney Morning Herald Good Pub Food Guide 2011 features handy "The Best" sections, including the best beer lists, the best family-friendly pubs, the best views – even the best chips!

"This being the first Good Pub Food Guide we can't claim to be omniscient, and there will be places serving great food which we haven't yet discovered," Keith said, adding that readers are warmly invited to suggest pubs for future reviews by contacting him at goodpubfoodguide@gmail.com or by posting suggestions on the Good Food Guide Facebook page (www.facebook.com/goodfoodguide).

"Publicans are beginning to realise that the key to a great pub is exceptional pub grub. And if you want to know where to find it, this is the book for you. Certainly there are a few even I haven't managed to get round to yet so maybe I'll see you there."

Ø  Most promising
Simon Sim at the Botany Bay Hotel

Keith Austin is a pub lover of old and a former restaurant reviewer for the Sydney Morning Herald. He has also edited two cookbooks (Blokes and Seafood). British by birth and Australian by choice, Keith sipped his first beer at the tender age of six or seven — a glass of old-fashioned bottled Guinness passed surreptitiously out of the door of the local boozer in East London by his paternal grandmother, who said it would do him good. And so far she's been right. Drinking and eating in pubs has been a pastime of Keith's ever since, so when he was approached to edit The Sydney Morning Herald Good Pub Food Guide, his only question was 'when and where do I start?