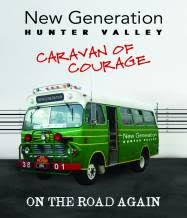 Kicking off in Melbourne on Friday April 20th with one of their infamous Pop Up Wine Bars, this one-month long travelling roadshow will be bigger and better than ever. As the saying goes, if it ain't broke, don't fix it – so the itinerary will be very much similar to last year's and will include 10 not-to-be-missed Pop Up Wine Bar and dinner events throughout 2000km of the spectacular east Australian coastline. From Melbourne the boys will head northbound and pop into Sydney (Friday May 11), Port Macquarie (Tuesday May 15), Byron Bay (Wednesday May 16), Brisbane (Thursday May 17) and finally Noosa for the Noosa International Food and Wine Festival where the group are heavily featured in the star-studded festival program (Friday May 18 – Sunday May 20).

Entry to all of the Pop Up Wine Bar events (Melbourne, Sydney & Brisbane) cost $30 and each will be held in a secret city location. Over 24 New Generation Hunter Valley wines will be on offer, plus a few extra specials if you know the secret New Gen handshake! To register for tickets, visit www.newgenerationhuntervalley.com.au and venue details will be released in the week prior to the boys popping up.

The New Generation Pop Up Wine Dinners will take place in Port Macquarie at the Stunned Mullet restaurant, and in Byron Bay at the glorious Byron Beach Cafe. Seats for these dinners will cost around $90 and will feature over 12 New Generation Hunter Valley wines expertly matched to the sumptuous seasonal menus these award-winning restaurants have on offer. More details on these dinners and how to book to come shortly…

And how, one might ask, are these six winemakers going to cover such a distance with all that is required to put on 10 unforgettable events? This year the boys will be travelling in serious comfort and style – and the sort of style that can only be summed up in a picture….

So all aboard for what will be one huge month of wine, wheels and whacky adventures. Make sure you're following @NewGenHV on Twitter and on facebook.com/newgenerationhuntervalley for all the latest and greatest. Trust us, this is one bus you really don't want to miss.

The New Generation Hunter Valley includes the winemaking talents of David Hook (David Hook Wines), Andrew Thomas (Thomas Wines), Rhys Eather (Meerea Park), Nick Paterson (Mistletoe Wines), Mike De Iuliis (De Iuliis Wines) and Andrew Margan (Margan Wines). What they have in common is the uncanny ability to make fantastic wine and have a fantastic time and a relentless ambition to put the Hunter Valley back on the map as a sublime and sexy destination.