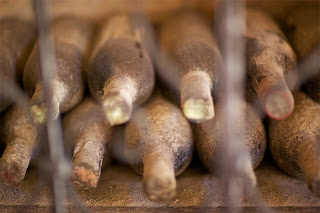 IN his continuing search for the more weird, wacky and wondrous in the world of travel, David Ellis says that when wine company Fifth Leg recently offered to swap for absolutely free a fresh new bottle of one of their wines for a bottle of any other label that owner's thought may have been a bit suss, an amazing 3,200 people travelled to bottle shops across Australia to accept their offer.

And many were remarkably frank about "bad wine experiences," including one-in-four admitting that if given what they considered to be a poor bottle of wine as a gift, they would re-wrap and re-gift it to someone else at a later date – while three-in-ten said they'd open and offer it to everyone at their party "for all to suffer."

The West Australian-based Fifth Leg invited people to take a suspect wine to select First Choice liquor stores Australia-wide on what they called Fifth Leg Bad Taste Amnesty Day, taste for free five Fifth Leg wines on offer, and to swap their possibly "crook plonk" for one of those fresh new Fifth Legs.

The amazing 3,212 bottles brought in to swap ranged from some without labels to others with labels Fifth Leg and First Choice staff said they'd never heard of, and with many looking very much like they'd been left to age most-ungracefully in the backs of kitchen cupboards, "under the house," in garages and even garden sheds.

The majority brought in to swap were Sauvignon Blancs and Chardonnays, with greatest interest in those on free-swap offer being Shiraz, Chardonnay and Fifth Leg's Cabernet Sauvignon Shiraz Merlot blend.

Fifth Leg is an off-shoot of Margaret River winery Devil's Lair, and is named after the fossilised skeleton of a Tasmanian Tiger found in a cave on the Devil's Lair property, with a mysterious fifth leg amongst those remains…

But that's another story.


PHOTO CAPTION: IN the back of the kitchen cupboard, under the house, even in garden sheds… some wines are left to age most ungracefully. Photo: Catherine Wyatt Bell.