Canowindra’s Pig in the House 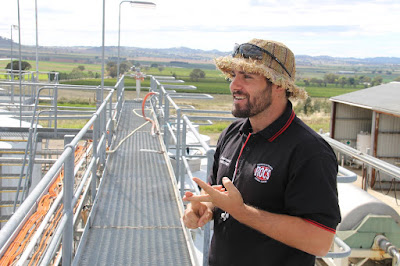 JOHN ROZENTALS looks at a new pig entering the house to join the ranks of organic wine,

Both wines retail for $25 at full margin.

The growth in sales for Pig in the House correlated with the growth seen in the organic wine market over recent years, with figures revealing that the number of consumers who claimed to have purchased organic wine increased from 13per cent in 2012 to 20 per cent in 2016.

"We are also seeing this increase in consumption through our distribution channels," said winery owner and vigneron Jason O'Dea.

"This growth, along with increasing demand for rosé made it an easy decision to make the new Pig in the House Organic Rosé."

Pig in the House 2017 Organic Rosé ($25): Winemaker Anthony D'Onise chose mainly sangiovese, blended with just a touch of shiraz, to make this wine, which is resfreshingly crisp, enticingly flavoured an quite dry. "Stylistically speaking, we were aiming to capture the varietal characters," said D'Onise. Mission accomplished.

Pig in the House 2017 Organic Chardonnay ($25): I like this modern style of chardonnay, with its just subtle of oak gained through 15 per cent barrel fermentation. D'Onise likes the "white peach purity" of chardonnay from the Cowra district. So do I.
Posted by rodeime