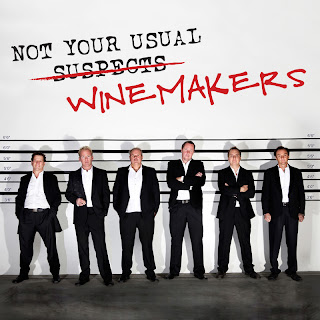 Mike "Micky D" De Iuliis & Andrew "Margs" Margan have had enough R&R* since parking their caravan (which surprisingly enough only received a few minor dents and scratches between Melbourne and Noosa!) and in the month of October will be once again bringing the delights and delinquents of the Hunter Valley to you in two separate but equally exciting events!

The New Generation boys will be popping up in a secret Sydney location on Friday 21st October. Hailed with the moniker "New Generation Hunter Valley Pop Up Wine Bar", this truly unique and spontaneous event will show Sydney-siders why the Hunter is hotting up and who is making some of the sexiest Semillon and Shiraz around.

The New Generation Hunter Valley Pop Up Wine Bar is proud to be a part of The Sydney Morning Herald Crave Sydney International Food Festival, presented by Citibank, and tickets for this Pop Up Wine Bar are only $30 giving you a whole lot of heavenly Hunter wine and a chance to meet the characters behind the brands in the most unexpected of spots. Register for tickets at www.newgenerationhuntervalley.com.au from Saturday 27th August.
And that's not all! On Saturday 8th October the New Generation boys and Bells at Killcare will be teaming up for this year's Crave Sydney International Food Festival 100 Mile Meals. Bells at Killcare acclaimed chef Stefano Manfredi will create a sumptuous five course degustation menu where all produce used is sourced from within a 100 mile radius of the picturesque Bells at Killcare, and naturally the menu will be matched with New Generation Hunter Valley wines. The New Generation boys will be there to share their stories and divulge their mission in making the Hunter Valley the happening place to explore once more. Visit www.bellsatkillcare.com.au/whats-on.html for bookings and further information.

When November hits and you think the six suspects are safely back in the Hunter for good (who's going to make the wine after all?!) spare a thought for early next year as rumours have it that there may be a newer and even shinier caravan hiding in the depths of the vines being polished and prepared to rev it's engines on the roads of the east Australian coast once more….watch this space – the New Generation Hunter Valley winemakers could just pop up anywhere!

*R&R is not an Australian rum based beverage!