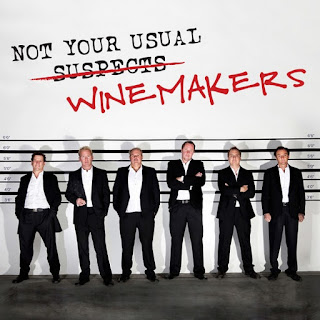 Tonight was a big night for the New Generation Hunter Valley winemakers, with the 2011 Citibank NSW Wine of the Year and Trophy for Best Young Chardonnay going to Mistletoe Wines 2009 Reserve Chardonnay ($40), made by Nick "Doggy" Paterson – one of the 6 not-so-usual suspects!

Andrew "Thommo" Thomas was not far behind Doggy on his way to the stage, collecting the gong for Best Mature Dry White with his Thomas Wines 2006 Cellar Reserve Braemore Semillon ($45). With Mike De Iuliis also scoring a place in the fiercely contested NSW Wine Top 40 for his De Iuliis 2009 Steven Vineyard Shiraz ($40), the New Generation Hunter Valley confirms their place amongst the best winemakers in the state and no doubt the whole NGHV clan, which also includes David Hook (David Hook Wines), Rhys Eather (Meerea Park) and Andrew Margan (Margan) will be celebrating their mates' triumphs in style!

One third of the Top 40 wines were from the Hunter Valley, dismantling claims that the Hunter is old-hat and unexciting. In fact, wines in the NSW Wine Awards Top 40 are mostly made by the "new generation" of winemakers rather than the old family institutions - there are thrilling times ahead for family owned Australian wineries.

Exciting is how the New Generation Hunter Valley like to roll, with the boys popping up in a secret location with a wine bar in Sydney's eastern suburbs this week on Friday 21st October for one night only. This Pop Up Wine Bar is part of The Sydney Morning Herald Crave Sydney International Food Festival, presented by Citibank, and tickets can be purchased at www.newgenerationhuntervalley.com.au . This will not be your usual Friday night drinks…

Plans are also well underway for the second episode of the New Generation Hunter Valley "Not Your Usual Caravan of Courage". The boys couldn't help themselves but to do it again in 2012 after the first adventure was such a wild success, so watch out for more details to come on this. One thing we can say is that their road show will kick off in Sydney and again culminate in the Noosa International Food and Wine Festival from 17 May 2012.

So despite claims that the Hunter Valley isn't doing much fresh and exciting, this group of blokes are making waves (and occasionally surfing on them) in the wine industry and demonstrating that there is new blood in the Hunter who are doing amazing things with their old vines….grey hairs and all.