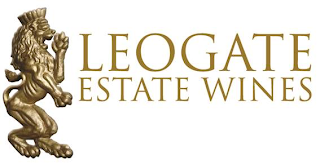 "Len Evans would be delighted. His favourite vineyard has been honoured as having produced the grapes for the World's Best New Wine" say Bill and Vicki Widin of Leogate Estate Wines and Brokenback Vineyard.

The 2014 International Wine Challenge in London last night awarded the "James Rodgers Trophy for the Best Wine in its First Year of Production" to Leogate Estate's 2011 "The Basin" Reserve Shiraz (RRP $115).  When accepting the award in person at the gala dinner, Bill and Vicki Widin attributed the Trophy both to Len Evans' attention to detail in establishing Brokenback Vineyard, and to Mark Woods' superior winemaking skills. "The Basin" had earlier also been awarded the Trophy for the best Hunter Valley Red Wine.

Leogate Estate's Brokenback Vineyard in Pokolbin was one of Len Evans' Rothbury Syndicate vineyards planted in the 1960's. The Shiraz vines all original, and are situated on a low hill with direct east and west facing blocks. A substantial section of the east facing blocks is known locally as "The Basin" and forms somewhat of a natural amphitheatre. The vines there, being protected from much of the Hunter Valley late afternoon summer sun, have developed over the years rather differently from the vines on the west facing blocks - primarily by being more luxuriant in both vine size and canopy. This difference in the vines is entirely environmental, and results in a slightly different berry taste.

Leogate Estate's talented winemaker, Mark Woods, to his eternal credit, noticed this difference and for the 2011 harvest decided to keep separate the parcels he selected from each east and west section to be the 2011 Shiraz Reserve wines, naming the two parcels "The Basin" and "Western Slopes".

The London judges described the 2011 "The Basin" as "Refined, cool Shiraz style with bright fruit, savoury notes, supple tannins and great drinkability. Lovely freshness on the palate which lifts and lengthens the overall flavour". The judges also described the "Western Slopes", for a Silver Medal, as "Sweet, ripe berries and vanilla on the nose. Peppery, roasted flavours with a concentrated great length and well balanced tannins".

Although only recently bottled, Leogate Estate's 2013 "The Basin" and "Western Slopes" Reserve Shiraz are already magnificent drinking and have outstanding cellaring potential. Brokenback Vineyard had a great season for the 2014 vintage, and both wines in barrel look very good at this stage.