Drink Up - Australians Are Drinking Less, But Better 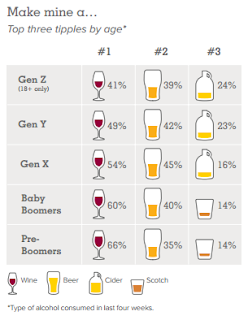 Australians say they are drinking less but better with our per capita spend on alcohol rising as we seek out more premium alcoholic beverages, according to a new report released today.
The emmaTM (Enhanced Media Metrics Australia) Alcoholic Beverages Trends & Insights Report* found that half of people aged 18 years and over say they are drinking less now than they used to. There is also a move to premium beverages, with the dollar value of liquor sales rising 1.5%^ in 2015, which means Australians are spending more on their favourite drink.

Australia is an overwhelmingly wine and beer drinking nation. Wine is our most popular drink, although men up to age 65 prefer beer, the emma data has found. Cider is our third most popular drink, followed by scotch or whiskey, with other varieties well behind. Women opt for wine more than twice as often as other drinks, whereas men are more varied in their consumption patterns.

White wine edges out red as the most consumed at 43% of adults, compared to 41%, while 23% enjoy sparkling wine or champagne.

“Alcohol is still very much part of Australian culture, with three quarters of adult men and women consuming an alcoholic beverage in the past four weeks. Alcohol also features heavily in people's social lives with the majority preferring to drink with friends,” Ipsos Connect Executive Director – emma™, Jane Nicholls, said.

“The trend towards drinking better offers growth opportunities to premium brands that can tap into the mindset of these consumers. The move by Australians towards more premium beverages and spending more as a result, underscores the importance of effective brand positioning and marketing.”

Perceptions of quality and value change as people age and emma data shows that older people are more likely to believe that Australian wine is better than that from overseas. They were also less likely to try foreign beers, preferring homegrown brands.

According to Ipsos's consumer segmentation, there are four key segments that represent 35% of Australia's adult population who are the most likely to drink any alcohol more than once a week. They are the 'Educated Ambition' (highest earners and most educated), 'Social Creatives' (young, affluent urbanites), 'Serene Seclusion' (people at or near retirement living in regional and rural areas) and 'Conscientious Consumption' (middle and upper class families) segments.

* The report draws on data from emma (Enhanced Media Metrics Australia) to explore the changing mindsets, preferences and behaviours of Australian adults towards alcohol. emma interviews more than 54,000 people each year.