Sydney Craft Beer Week is back 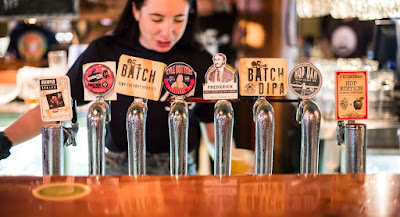 Sydney’s largest celebration of craft beer, Sydney Craft Beer Week (SCBW), is back with a magnificent program brimming with beer-tastic adventures from Friday 21 to Sunday 30 October 2016. More than 100 events at over 75 different venues around Sydney will bring the brew to Sydneysiders, bigger and better than ever.

No longer just a trend, craft beer has become ingrained in Sydney’s social culture. SCBW Director Joel Connolly said, “This year’s program is a reflection of the craft beer industry’s growing popularity. I started Sydney Craft Beer Week six years ago for quite selfish reasons, I just wanted to drink good beer and Sydney was in short supply. Now there are hundreds of incredible brewers doing some awesome things all across the city, which makes programming an event like Sydney Craft Beer Week a whole lot more fun!”

The festival kicks off with the pinnacle of craft beer experiences, the Opening Gala Night at the Giant Dwarf in Redfern. Each year the Gala is a sell out, so for 2016 the event will run two sessions across two days of the opening weekend. Thirsty hop diehards won’t miss an opportunity to sample a showcase of handpicked beers and brewers who will be featured over the Festival’s week long run.

The Crafty Pint is bringing the popular Pint of Origin™ to Sydney Craft Beer Week for the first time, turning Sydney into a microcosm of the Aussie beer world for the week. Six pubs across Sydney turn their taps over to beers and brewers from the six Aussie states to give small breweries a chance to showcase their wares to lovers of a good brew.

Pizza and beer has been an age-old match made in heaven, and this year everyone’s late night favourite, Frankie’s Pizza joins in on the fun, releasing nine brand new beers produced by top brewers from around Oz and NZ. The free entry event on October 24, will see the masses swiggin’ on cold crafts, sampling some top notch slices and rockin’ and rollin’ to Frankie’s World Famous House Band.

Now here’s a history lesson your taste buds will thank you for, Beer through the Ages: A Beer History Experience, is a brand-spanking new event for the Festival and takes beer lovers on a drinkable journey through time. Learn about the migration of beer from Mesopotamia to Egypt, Scandinavia and beyond, all while enjoying five historical styles of beer from different periods of time.

Beer is great, but free beer is LEGENDARY! Beer Cartel’s Ultimate Free Beer Tasting is giving a chance to taste over $1000 worth of craft beer - for free. Brewing powerhouses Westvleteren 12, Founders KBS, Stone & Wood and many more have banded together to deliver the ultimate tasting experience. Like a beer themed tour of Willy Wonka’s Chocolate factory, there’s a lottery to decide the lucky few who get to snag a golden ticket to this event. Register on the SCBW website to enter the draw to win a seat!

To celebrate the thriving craft beer industry, SCBW are hosting the inaugural Sydney Craft Beer Awards. Not only will the best of beers and brewers be celebrated in this industry night of nights, but also all those behind the scenes that make the craft beer scene in Sydney as rich and vibrant as it is today.

After the awards, punters can sooth their fuzzy heads with the Hair of the Dog Breakfast at the Rocks Brewing. Six indulgent courses will be paired with six of the best beers to help relieve the craft comedown bought on by the night before.

Festival favourites also return in 2016. Last year Holes ‘n’ Hops was a sell-out with punters starting the day smashing burgers and brews before taking to the greens for a nine-hole golf tournament - with a beer for each ball sunk.

Most wouldn’t think sharp tools flying through the air and beer would be the best mix. Not so, says SCBW! Last year’s Meat, Beer Axe event was as thrilling as it was safe, and returns in 2016. Willie the Boatman is teaming up with Maniax axe throwing centre and the juicy lads of Bovine and Swine to present another night of axe throwing, beer drinking and meat eating fun.

Like Sydney’s craft beer movement, Sydney Craft Beer Week has grown to be hugely popular with locals and visitors alike. So gear up, polish off the beer goggles and get ready to say a toast to Sydney’s favourite Festival.

To check out the full program of events, visit www.sydneycraftbeerweek.com